It seems Jack Lawson was destined to attend St. Andrews. Jack knew about the college from its beginnings. Growing up with Presbyterian roots in Winston-Salem, North Carolina, his two older siblings and friends from church attended St. Andrews before him.

Jack graduated in 1974, majoring in Religion and Philosophy; he wanted to attend a learning community for college and, like many others, was drawn to the small student to faculty ratio at St. Andrews. Recalling his time at St. Andrews as the “most outstanding academic experience of his life,” Jack said, “Education for living is what St. Andrews means to me. And that education was founded on two things: interdisciplinary teaching and a community of learning.”

The turmoil of the late ’60s and early ’70s impacted Jack’s area of study greatly; as a freshman entering college, he thought his path would lead in a different direction. Leading ministers and theologians like M.L. King, Jr., Daniel and Philip Berrigan, Will Campbell, and others greatly impacted his studies while at St. Andrews. He said, “This helped me to focus on Religion and Philosophy, as a way of looking deeply into ideas about what it means to be human.” Jack would later earn his Master of Divinity degree and then his Master of Philosophy degree in Hebraic and Cognate Studies because he wanted “not only to read the Bible in its original languages, but also the languages of the surrounding cultures.” His Ph.D. would focus on the “organizing principle of so much of Mesopotamian thought: the idea of Fate.” Jack’s academic pursuits made him culturally aware of the world, having lived and studied abroad for most of his life. Since learning the importance of understanding different languages while at St. Andrews, Jack has studied eleven, aiding his academic publications in France, Germany, Finland, and more. “I found that language is the key—the only real key—to understanding another culture. All of my education has helped me feel at home in the world,” said Jack.

After graduation, Jack attended divinity school at Andover Newton, Harvard, and Duke. That significant time and place of his life would steer Jack towards his next pursuit as a prison chaplain: “When I was at Duke (1976-78), North Carolina had the largest number of inmates on death row in the US. I truly found myself called to work in prison as a chaplain.” Jack served in prison ministry for seven years in both North Carolina and Ohio. From there, he worked in parish ministry in the US and England, and in 1997 he moved into a new role as a Community Development Worker in Southeast England, focusing on rural economy. Jack said, “Because of the interdisciplinary learning that was the basis for education at St. Andrews, I have felt able to move between roles in life without great disruption.” Jack also continued his academic journey while working in the parish ministry, finishing his Ph.D. in Hebrew Bible and the Ancient Near East.

(From left to right: A photo of Jack speaking at the Abbey Church, Fecamp, Normandie; Jack’s photo ID from his “Prison” Days)

Even with many different roles and responsibilities throughout his career in ministry and service, Jack never lost sight of his purpose. He said, “Vocation is simply living into who we really are…although it took me quite a few years to realize it was that simple! Vocation comes from the Latin, vocatio, meaning literally “a calling”—or what we feel we were made to do. My vocation has been to serve other people and to touch their lives in some positive way. Vocation is not about finding ‘the right job’—it is about being in a working environment in which you can invest yourself without hesitation or reservation, and do so with joy and passion.” In 1995, Jack was awarded the St. Andrews Distinguished Alumni Award for his scholarship and Christian Service accomplishments. His work in ministry was inspiring to many, epitomizing the St. Andrews spirit of service to others in need. 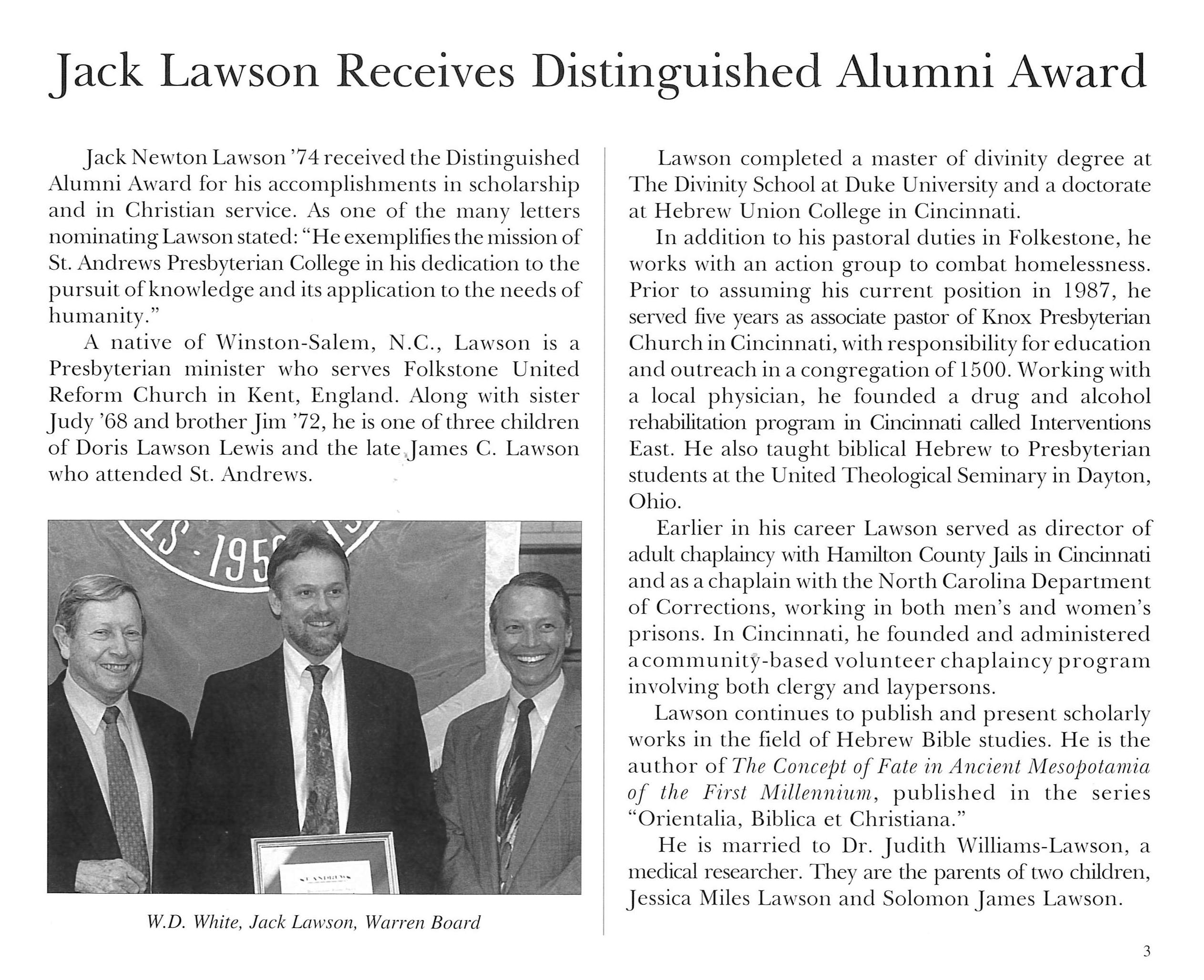 As he likes to say, in his “rewirement”, Jack has dedicated his time to fictional writing since retiring from ministry work. “In recent years I have been pursuing a passion for fiction writing which was honed under the tutelage of various professors at SAU. Anyone who was at St. Andrews during the years of “C&C” will know how much reading and writing we had to do—far more than my kids when they were in college!” Like many other “St. Androids” of the time, professors W.D. White and Ron Bayes were major influences in Jack’s interest in writing. “Even before attending St. Andrews, I had been a keen reader of fiction, but with White’s and Bayes’ encouragement, I began dabbling with fiction. However, due to academic pursuits, sermon and lecture writing, I put off trying to write a novel until 2009.” Jack is now working on his fifth novel with his publisher Wings ePress in the US. His published titles include: Doing Time, No Good Deed, Criminal Justice, and The Woods (releasing in September of 2021); they are a range of works (see descriptions from Jack at the end of this post) from reflecting on Jack’s ministry work in a Southern Women’s prison to a more humorous read looking at aging. Starting a new life course, even in retirement, isn’t for everyone. We often put off the unknown of something new for reasons of contentment or even perhaps intimidation. The time and effort Jack has invested in his new passion has been well worth the journey. He said, “I was just about to start another academic research project, when my wife (who taught at the University of East Anglia) told me that two of us doing research work would make for a stifling home life, so why didn’t I finally ‘write that novel you’ve been talking about?’. So I did. It was a liberating experience—I wish I had done it earlier.”

Having spent most of his adult life in Europe and now living in Basse-Normandie, 47 years later, Jack still believes St. Andrews equipped him for the world at large. He said, “The first time I saw Notre Dame, I was still a student, but those lectures about medieval art and architecture came flooding back as I studied the flying buttresses, gothic arches and stained glass. The building did not look ‘foreign’ to me.” When asked what advice he would give to current students, Jack said, “If your parents—perhaps with your help—are going to invest in private education, then make sure you get your money’s worth. Learn how you learn, and hopefully you will enjoy it! If you should go on for an advanced degree, you won’t find many places like SAU—trust me; so take advantage of what it has to offer.”

Thank you, Jack, for sharing your story and telling us what St. Andrews means to you. We wish you the best of luck with your future novels!

Doing Time, a reflection of my experience working in a Southern Women’s prison. This novel examines the direct link between domestic violence and female incarceration.

No Good Deed, is an examination of America’s twin passions: religion and war, as seen through the lives and friendship of two men, starting in the 1960s and ending in the present.

Criminal Justice, looks at the criminality of America’s justice system through the experiences of a chaplain first introduced in Doing Time.

The Woods (to be released in September this year) is a humorous, irreverent and whimsical look at ageing. It is set in an enchanted retirement community in NC.

My fifth novel is in process, and is loosely based around the deliberate dumping of toxic PCBs in six eastern counties of NC forty years ago.